Could your child select one much loved, high quality, gift condition ‘preloved’ book to donate during Book Week Scotland (by Friday 27th November). Sciennes is one of six school collection hubs and our Pupil Council is helping to sort and deliver donated books.

A report on City of Edinburgh’s 1:5 Hungry for Books project published in the Edinburgh Reporter on Tuesday November 24th, 2015 by Phyllis Stephen: 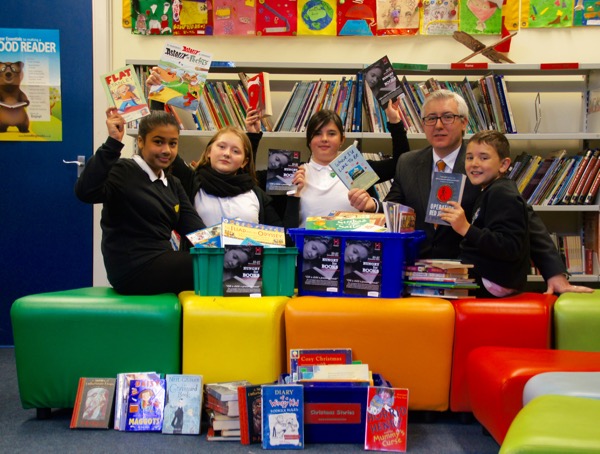 The Edinburgh Reporter went along to Dalry Primary School to find out about the latest project they are involved with. Donating children’s books to be distributed in the run up to Christmas is the latest phase of the City of Edinburgh Council’s pioneering child poverty campaign.
The ‘Hungry for Book’s challenge is part of the council’s ‘1 in 5: Raising Awareness of Child Poverty in Edinburgh’ campaign currently running in five primaries and one secondary school.
It is taking place during Book Week Scotland and the main aim is to highlight links between child poverty and low literacy.

The public are encouraged to donate high/good quality children’s books all this week until Friday 27 November and the pupils will then ensure these go to food banks or other organisations in time for Christmas. 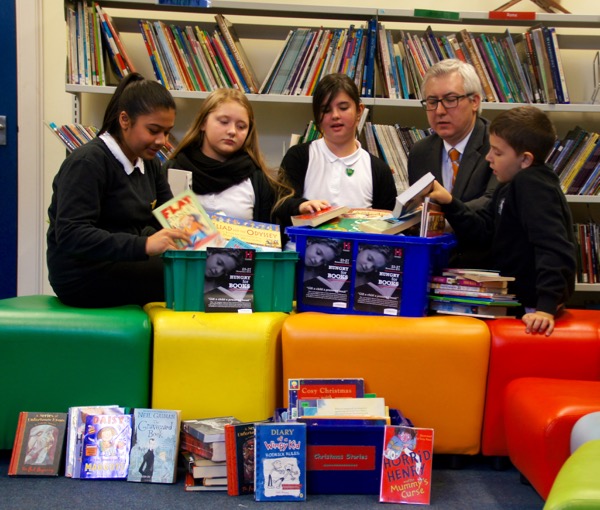 Councillor Paul Godzik with the four clan chiefs from Dalry Primary School
Each school will be a hub for donation of books in different areas of the city – Broughton High School (north), Royal High Primary School (east), Sciennes Primary School (central), Gracemount Primary School (south), Dalry Primary School (west) and Hillwood Primary School (south west).
Councillor Paul Godzik, Education, Children and Families Convener, said: “The ‘Hungry for Books’ challenge is a positive way of trying to help more children living in poverty access the type of books other children enjoy. It is well-documented that children from poorer backgrounds lag behind at all stages of education so it’s important we do all we can to close the attainment gap.
“Donating books for children to read, both on their own and with their parents, is a positive way for the public to play their part in achieving this.
The Council will continue the great work of our ‘1 in 5’ campaign to ensure every child in Edinburgh is given every opportunity to have the best possible start in life.”
Dalry Primary School Head Teacher, Grant Gillies, said: “The ‘1 in 5’ project has had a significant impact on the life of our school and the decisions we make because the children and families in our school community face real challenges. It is our job to equip them with the skills and aspirations to overcome these. More than that though, as a school we have social responsibility to ensure opportunities are for all and they are inclusive. That’s why pupils are very excited about being part of this Hungry for Books Challenge.
Another good example of the impact of raising awareness within our school  project is when we planned for our whole community outing at Christmas. We spoke about the way we charged for it in the past and this year we have a price structure that means bigger families pay less. It is these small things that make a difference. Small changes in our approaches make for big changes in our children’s lives.”
The ‘1 in 5’ project aims to raise awareness of the impact of child poverty and identify best practice and changes that can be introduced to make school more affordable for families on low incomes. The project involves working with children, staff and parents to challenge the stigma that affects children living in poverty.
Last week a poster competition was launched at Hillwood Primary School where pupils took part in creative art workshops led by artist Heather Lucchesi to design images which highlight some of the issues faced by children whose families live on or below the poverty line.
Winning images  will be incorporated into a poster to be distributed to primary schools across the city along with guidelines for schools on how best to support families living on low incomes including actions to reduce the costs associated with school such as school uniform, trips and resources.
Councillors on the Education, Children and Families Committee heard last month that just over 21% of children in Edinburgh live in poverty and this figure is forecast to increase significantly by 2020.
Every area of the city is affected with each Council ward having child poverty rates of over 10%. It’s estimated that the cost of delivering services to address the impact in the Capital is around £156m a year according to the Child Poverty report which outlined various actions being taken by the Council to lessen the impact. Key areas identified include:
Other actions include increase breakfast club provision and further develop family engagement with a focus on strong home-school partnerships.
The report also highlights the importance of income maximisation to raising attainment. Research has shown that the level of household income plays a major role in attainment levels with more initiatives needed to increase wages, encourage take up of unclaimed benefits and other finance-related poverty costs.